With FlexiPDF 2022 for Windows, you can work on documents in any language, except Arabic and Hebrew. 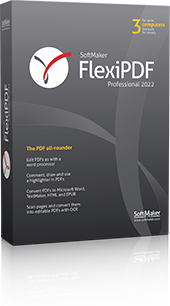 Try it out for free